Following the war, in 1920, the Listowel Golf & Country Club Ltd. was organized and the present site on the northwest corner of town was acquired.  The original “Sandy Kay” property of 50 acres was to be “transformed into splendid golf links.”

The Listowel Golf & Country Club was chartered as a Limited Company on April 14, 1920.  Owning 50 acres of which a portion of 13.25 acres were purchased from the Keeso farm, the company was formed and promoted by eight prominent Listowel Businessmen.

Rev. David Ritchie, originally from a home overlooking the Old Course in St Andrews, Scotland, designed the original seven hole layout.  Reverend Ritchie was posted as a Presbyterian Minister in Francis, Saskatchewan from 1905-1911, and developed a reputation as a passionate player, winning the 1910 Balfour Cup, the Saskatchewan Men’s Amateur Competition, in Regina.  Ritchie’s other layouts include the 1913 Stratford Country Club, and the 1920 Kincardine Golf Club.

Newly married, he started off for the Regina competition in a democrat, with his bride on the front seat beside him and his golf clubs in the back. Somewhere along the way the democrat (four-wheeled horse-drawn carriage) hit a terrific bump and confusion reigned for several minutes. Straightening himself out, the Reverend glanced back, then calmly turned to his much shaken-up bride and remarked, “Mercy, I almost lost my golf clubs that time!” Rev. J.M. Ritchie, also a Presbyterian minister, reported that his father still enjoyed golfing in Seaforth, Ontario in 1946 but was only able to play nine holes a day.
(Leader-Post, 1946, Jul. 12)

On May 17, 1920 the shareholders held a meeting to elect a board of directors.  A point of interest is that the playing fees were as follows:

Also, at the time they purchased a flock of sheep to keep the grass down and by 1923 had a flock of 20 lambs and 19 ewes.  In 1927 a fairway mower was purchased as well as a set of leather boots for the horse to pull this mower.

The original layout was seven holes.  Later, two more holes were added bringing the layout to nine holes.  Pictured is a sketch of the nine-hole layout, over top of an aerial picture from circa 1989. 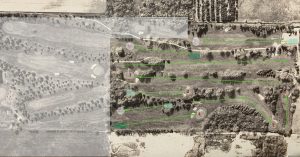